On Starting A Collection

I have started a collection. It happened by accident really. I was picking up clothes on my floor a few days ago, and I noticed some stickers on the ground. It was a pile of five or six inspection stickers. Today, I got lucky and another one came to me. It was the inspected by 76 sticker.

If you have any suggestions on how to obtain them more quickly or how to contact particular people associated with each number that would be greatly appreciated.

Photos of the collection to come.
5 comments:
Email ThisBlogThis!Share to TwitterShare to FacebookShare to Pinterest

1. I wish they still had pink armies.

2. It wasn't a game of world domination but instead a "continental game"

3. The armies were made of wood

4. The big armies could double as food in my doll house because they looked like jelly beans.

5. They used color gradients on the countries and not just one solid color for the whole continent.
6 comments:
Email ThisBlogThis!Share to TwitterShare to FacebookShare to Pinterest

Keeping To The Theme

As I was looking at the last two posts, I realized how quickly my blog has turned into Oprah's Book Club. So I thought perhaps a selection of themed postings would be nice. Obviously, this post will also be about bound pages we shall call books. 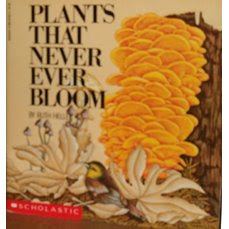 photo:
This book should not be confused with the following similar titles:
Plants That Sometimes Bloom When Scientists Aren't Watching,
Plants That Will Quite Possibly Never Bloom In Our Lifetime,
Plants That On Occasion May Bloom But Proof Cannot Be Found,
or Mutants From Outer Galaxies

Additionally, I am sorry for the quality of the photo. I refused to put a nicer photo of the soft cover edition because I had the hard cover edition, and thus, the photo is what it is. Again, my apologies to your eyes.

Also, the inside cover was a progression of a mushroom throughout its life; it's life cycle if you will. It was one of those really cute red mushrooms with white polka dots that you never actually see in real life but are always shown in books. It's like the dancing mushrooms in Fantasia. After I wrote those last two sentences I attempted to find a picture to show you since I didn't think my words did it any justice. Guess what? Your peripheral vision works, I found it. Here: 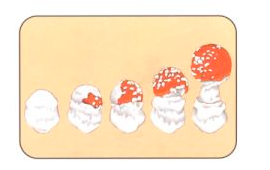 photo: the first half of the red capped mushroom life cycle.

I'm pretty sure I didn't like the book for the content because I hate mushrooms these days. Perhaps, this is why I don't enjoy eating them now. I can't do it after all those years of getting close to them in my book knowing that they never ever bloom. Or perhaps I was let down in life when I went to search for the cute red mushrooms with white spots and managed to find white capped ones in the grass after it rained.

I am currently wondering if Oprah has ever had any picture books in her book club because these pictures were some of my favorites. I wonder if she even has a book club still. If she does, I'm surprised she doesn't demand to have new covers made for the books in the club to be of her in different poses. I believe this will be more effective than just a giant sticker on the front. I bet if it doesn't exist anymore that was the reason for it falling apart. Here's a cover I imagine her demanding: 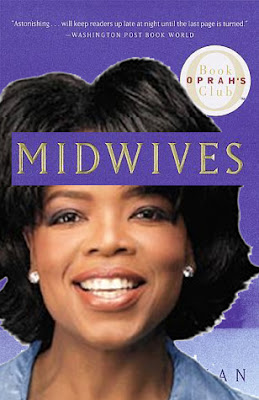 5 comments:
Email ThisBlogThis!Share to TwitterShare to FacebookShare to Pinterest

Have You Heard Of Books? 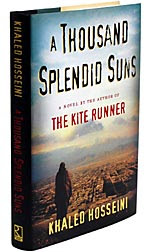 4 comments:
Email ThisBlogThis!Share to TwitterShare to FacebookShare to Pinterest 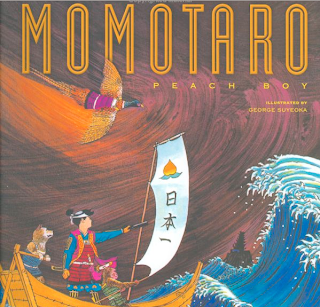 A friend of mine was wearing a peach and sumo wrestler shirt today and it reminded of how much I loved the book Momotaro. If you ever get a chance I do recommend reading it. Perhaps, it is the inspiration for James and the Giant peach.

This beautiful version was illustrated by George Suyeoka. He also illustrated Urashima Taro and Issunboshi which are delightful tales as well.

Wikipedia says: According to the present form of the tale (dating to the Edo Period), Momotarō came to earth inside a giant peach, which was found floating down a river by an old, childless woman who was washing clothes there. The woman and her husband discovered the child when they tried to open the peach to eat it. The child explained that he had been sent by Heaven to be their son. The couple named him Momotarō, from momo (peach) and tarō (eldest son in the family).

3 comments:
Email ThisBlogThis!Share to TwitterShare to FacebookShare to Pinterest

I sure do like her. I liked her a little before today. Well, actually that's not really true. In 6th grade, I was at home sick watching MTV music videos and a new group called The Spice Girls had a song out called Wannabe. Well, everyone knows what happens next. I believed I had super extraordinary girl rocking powers and together with the Spice Girls we would create world peace. Something like that. Anyways, I was a Spice Girl for Halloween that year, Erica and I watched Spice World at least a thousand times, and made our own music videos. 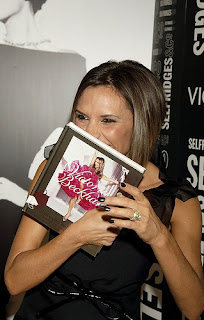 Photo: VB holding a book I really think I ought to own since
I'm not the best with fashion, even though I really do wish I was better.
Out of all the Spice Girls, Victoria seemed the most mysterious. I don't know if it was all the black Gucci dresses she wore or the fact that she never really spoke too much, but she was the least girl powery of them. 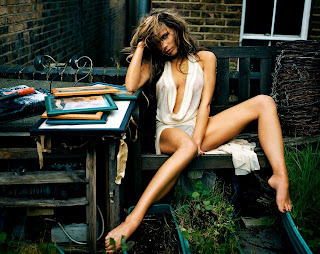 Photo: A picture for the boys who read el blogo
Since all good things must come to an end, the spice posse faded from my mind. Victoria Beckham has since always been here and there in the papers, but I never really took notice until she cut her hair really short and dyed it blond. I don't know why it was then but when I saw the new pictures of her, I thought it cleaver that she wore such big sun glasses so she could shield herself from the paparazzi. In my mind I said, "Good idea, co sharer of the royal name Victoria."

Today, I decided to go to her website where she has some video recordings of her being goofy, a side I never knew she had. (Obviously, since I don't know her at all.) This link will take you to the site where if you press the VBTV on the left hand side you will get to them:

If ever given the opportunity I think it would be really nice to sit and have lunch with her. I do believe we'd get along nicely.
7 comments:
Email ThisBlogThis!Share to TwitterShare to FacebookShare to Pinterest

Today, I found a bat.

This was right after I got in a battle royale with the eco-pass dude for not letting me take the bus paper back to the office. Anyways, I digress. I found a bat friend today. It was raining a bit on Pearl Street today and a bat friend came out to drink up the water pooling on the brick pathway. I'm now going to do a long, arduous Google search to find a bat that comes close to the one I found today since I forgot to take a photo of him.

He looked like the photo to the left but a little more alive looking and fluffier.

I sure find bats to be quite interesting. For example, look at his little hands. They are little baby high fives waiting to be united with someone's hands. I also learned from a blog (see photo credits) that if a bat gets caught in your house that you should shoo it out with a tennis racket. Just in case.

Honeysuckles and Other Such Matters

When I was little I lived in a house that had a tennis court in the yard. I say this not to brag, because while having a tennis court sounds posh it was rather run down with cracked green paint which exposed the black, gummy tar below. Also, I am not a world class tennis player, which means I might be making up this whole story.

Anyway, I spend my tricycle riding days on the tennis court, driving around the chalk drawn roads my sister and I had created. We created a delightful metropolis complete with highways, homes, and shopping malls.

While I remember little of many things that happened during this time in my life I do remember these key moments: 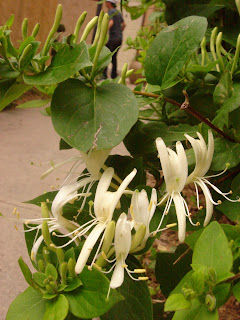 :Near the honeysuckle bush by the stairs, I said my first swear word when my foot fell through the wood staircase and my tricycle crushed me. I had picked up the word from my sister, thinking it was the word you said when things weren't going how you wanted them to. This incident would later come back to haunt me when I swore at a friend of mine on my soccer team. Years later she would tell me it was the first time anyone had ever sworn at her. I don't remember the incident, but I don't deny it happened.

:There was a rosemary bush planted right where the net met the end of the court. This caused riders to off road for a moment to avoid crashing into the net. The rosemary was always covered with bees.

:I remember the weird smell of the big leafy plants that bordered the bottom of the stairs. I deemed these plants the bank where I would collect my money to pay the tolls on the road.

:I got really mad at my sister for chalking express lanes for her bike, saying I couldn't use them because a tricycle wouldn't fit through the lines. To mend this situation, I made the "tricycle express" lane. My sister proceeded to zip through my tricycle lanes. She explained that she could fit through the lane so she was allowed to use them too. I started crying and went in the house.
5 comments:
Email ThisBlogThis!Share to TwitterShare to FacebookShare to Pinterest

While most of the other people at Adcenter fill their summers with exploring huge cities, I find myself amidst nature's finest offerings - boulder, colorado. Yes, it is true I have spent some time here in my past, four years to be exact, but I almost feel as though I'm re-exploring it for the first time. Except that I don't need mapquest to find my way around. Highlights from my big city experience include: 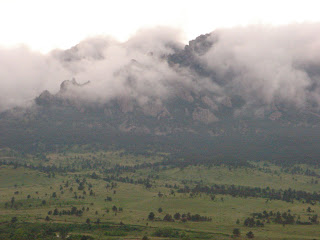 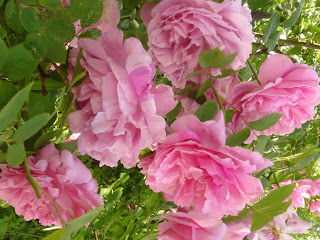 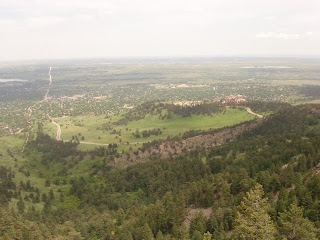