January 9th. Be there. Yes?
6 comments:
Email ThisBlogThis!Share to TwitterShare to FacebookShare to Pinterest 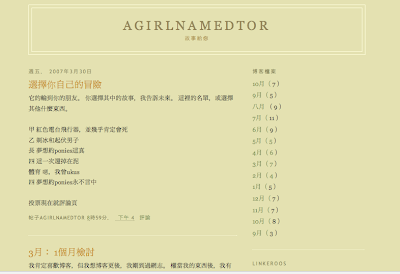 I enjoy the fact that linkeroos wasn't translatable.
5 comments:
Email ThisBlogThis!Share to TwitterShare to FacebookShare to Pinterest

Last night, I learned from a NPR article the hard hitting issues Dallas is dealing with these days. This is the newest and biggest in public awareness campaigns:

I know after seeing that you'll want to donate your time and money to the campaign since apparently in Dallas, asses are the cause of more deaths than murder, drugs, shark bites, and cancer combined!

I just adore this quote: "In Dallas, an interesting mix of politicians, hip-hop artists and white businessmen are announcing a citywide campaign with a simple message: Pull Your Pants Up." What's that you say? The white business men are concerned too? Wow, this must be a serious problem. I mean low hanging pants only afflicts black males, right? It's one of those rare single sex, single race epidemics.

On on a more serious less sarcastic note, I listened to the song three or four times last night and I could help but wonder if the song was doing more harm that good. The article ends by saying, "Dallas is taking a different approach, trying for the hearts and minds of its young people." Yet, their billboard and song lyrics tell another story, to me at least. The billboard headline reads, "Pull your pants up. It's rude, not cool. Walking around showing your behind to other dudes." In the song it say something like, "...showing your behind to other dudes. be a man." Though I can't speak for the gay male community, it sounds to me like that their definition of being a man means never looking at a man in a sexual way. I'm not even sure if this would be found offensive by the gay male community but it offended me.

But this situation isn't unique to Dallas. In Connecticut, the same problem was addressed about a year ago. While there was no rap to prove it, I found this quote from an article written highly amusing, "Last year, the WSJ’s Serena Ng described all sorts of problems for criminals who choose to wear them (saggy jeans) while they flee the police. 'When I catch them, I tell them they’d do much better if they had pants that fit,' says Jim Matheny, a 41-year-old police lieutenant in Connecticut." I may have missed something, but isn't catching criminals a good thing, assuming of course they are actually criminals? Shouldn't we be pro-saggy pants since they seem to think only "the criminals" wear saggy pants? Shouldn't the campaigns be about wearing over-sized shoes and other things to slow you down when trying to escape?

I'm just saying that people have the choice to look at other people's asses just as much as you have a choice to look at their faces. (unless you are buying those evil criminal cyborg pants) You can't tell an old person, "pull up your face gramps you're sagging" or tell someone with glasses "when the sun hits your glasses in just the right way it blinds me so they can't wear them - ever."

My rap would be, "keep you head up, make eye contact when you see people. smile at them once in a while. stop judging people by what they wear."

7 comments:
Email ThisBlogThis!Share to TwitterShare to FacebookShare to Pinterest

Once we were in the field, we did some research to figure out how many pumpkins we would be getting. The following is a step by step guide to getting the most pumpkins for your money.

Step 01 : Find the perfect pumpkin. This year the ones that chose me were oblong and tiny. 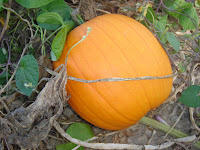 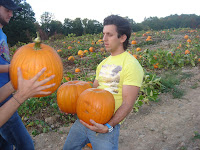 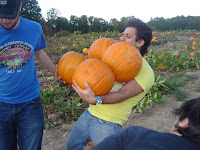 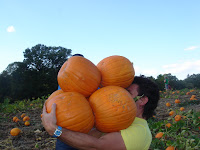 Step 05: A family portrait and the pumpkin we decided on. 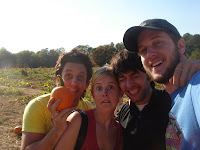 Well, we decided on that pumpkin and 19 others which we got all for $20. yay for family adventures!
8 comments:
Email ThisBlogThis!Share to TwitterShare to FacebookShare to Pinterest

Portuguese bean soup and sweet bread together. I had some sweet bread for dinner tonight but it just wasn't the same without the soup. I miss the homeland. 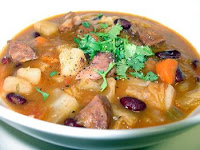 5 comments:
Email ThisBlogThis!Share to TwitterShare to FacebookShare to Pinterest

Why I Made The Right Choice and Columbus Didn't

The other day, I sat at Captain Buzzy's working on a book design when I overheard some VCU medical students in a study group. They were throwing around words like glucosamine the way adcenter folk throw around the vis-solu.

There wasn't anything particularly odd about the whole situation. It was actually kind of nice. I imagined myself sitting next to Farrah and Mariam while they plotted ways to cure Cancer through the autonomic LSQWEM adapters. (As you can see I took some liberties in exact replications of the situation. I don't want you other med students reading this and trying to cure Cancer yourselves. Leave that to Farrah and Mariam.) I imagined myself sitting at the next table so when they contemplated the scientific details they could look over at me and I'd nod to feel like I had something to do with it.

Anyway, back to the plot. So things were going smoothly until one of the med students, let's call her Columbus, started repeating over and over "the nicotine" like she had solved world hunger. I became so distracted by her nicotine repeat button that I started listening to her try to elaborate on the subject. 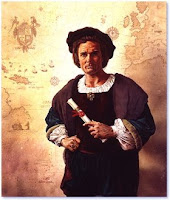 As Columbus began to read from her notes, I realized she couldn't pronounce anything but nicotine. Every other word out of Columbus's mouth sounded like the Nina, the Pinta, and the Santa Maria were crashing into each other. And we know that's a horrible noise due to all the cannons that were sure to be on all those boats.

But as Columbus's boats were crashing into each other, it hit me. If I were at medical school I would be Columbus: the babbling idiot at the medical round table study session, making it even harder for the future doctors of the world to study. I would be the reason Cancer wasn't cured or that other students could only remember the nicotine part of some adaption something. I can barely pronounce cornucopia, let alone string together a sentence of these $45 words to create some sort of competent sentence.

No one trusts a doctor who can't even pronounce what is wrong with you. "I'm sorry sir, it looks like you have an acute case of melphselphliansismaleas? or is that melfsefinansimphia?" So if you ever run into a doctor named Columbus you might just want to be switched to another doctor. As for me, you're just stuck with my vis-solu's.
10 comments:
Email ThisBlogThis!Share to TwitterShare to FacebookShare to Pinterest

when people come in to Buzzy's at 1pm and expect there to be everything bagels. I must tell you my friends of this great town of Church Hill everything bagels are in hot demand.
9 comments:
Email ThisBlogThis!Share to TwitterShare to FacebookShare to Pinterest

I'm Glad Someone Got Around To It

In college, Caits and I saw a craigslist posting looking for people to be greeting card writers. We always thought it would be great to create useless cards for people. For example, "I'm sorry I ran over your cat. Twice" or "You're right, Mac and Cheese isn't a nutritious dinner."

Today, I was introduced to a delightful version of what we only imagined our cards to be. The site is Someecards. Here is a sneak preview of their amazingness: 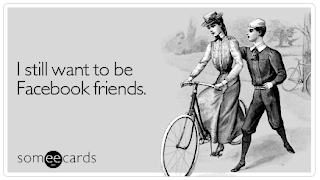 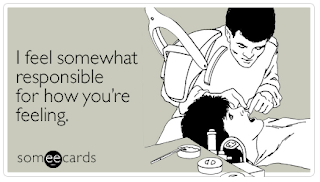 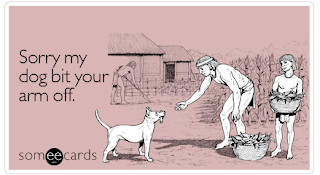 6 comments:
Email ThisBlogThis!Share to TwitterShare to FacebookShare to Pinterest

I was at the grocery store the other day and wandered aimlessly through the Halloween candy section. It got me thinking about one of my forgotten favorite candies: Lifesaver Swirl Pops. They come in blueberry/vanilla, strawberry/banana, cherry/vanilla, and orange/vanilla.

When I used to work my tourist job back home we would get the bulk boxes of them. When we would get them in I'd sort through them picking out my favorite: the blueberry/vanilla. They tasted so delicious. They didn't have them at the store. I wonder where I can get them these days.